Join us for the Adult series of Crossing Paths, a World Religions series for Adults. We’ll meet on the Second Sunday of each month, plus join the Middle School world religions class for field trips (dates tbd, click here for the calendar). 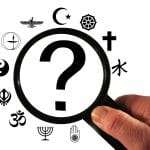 This year of exploration in a world religions program seeks to deepen our understanding of the dynamic, fascinating, and varied world in which we live. It seeks to broaden our knowledge of humanity and embolden our spiritual search.

Crossing Paths is rooted in religious pluralism. Put simply, this is a view that sees every religion as unique. Crossing Paths celebrates the values that religions share, but it emphasizes their uniqueness. Every world faith tradition was born in response to a distinct human struggle. We honor religions best when we work to understand the particular challenge and aspiration each religion has devoted itself to. So instead of using the metaphor of “One Mountain; Many Paths,” Crossing Paths invites us to see the religious landscape as “Many Mountains, Many Paths.”