I don’t usually jump into trendy Facebook activities, but then I got tagged by a friend, and I decided not to resist. For seven days I would post, without explanation, a black-and-white photograph “of my life”.

And it was fun. It also became a bigger deal for me than I anticipated – the exercise surprised me by being genuinely meaningful, inviting me into deeper self-reflection than I had expected.

I chose the first photo impulsively, only to realize later that it had captured a part of me that feels oddly precious, a part of myself to which I don’t devote much attention, but which is definitely a real and consistent aspect of my life. In that photo, I had captured my inherent clumsiness. (And also my preference for whimsical bandaids.) Not the most likely characteristic to promote, but completely true of me.

And so, on the six days that followed, I was determined to capture something each day that felt true of me, but also something not regularly on (my) social media display.

Quickly I decided that the photo composition was important – not just the content, but the perspective. And I learned that the black-and-white nature of the pictures was more significant than I previously realized. Without color, other details stand out in provocative ways.

I think this picture was my favorite of them all: 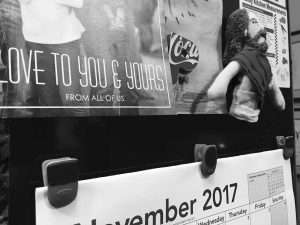 The average viewer probably doesn’t know that it’s a shot of our refrigerator, and that each of the items in view represents a different part of our family’s life, and of me. But I know. And each element is precious.

All in all, I approached the endeavor much more intently than I would have predicted. I learned some things about myself. And saw my world a little differently, too. What a lovely, unexpected gift.

May life present lovely, unexpected gifts to you, too. And may you, in turn, see your world just a little differently.