A question came up in a recent meeting involving UUCC members.

Several attendees included their pronouns as they introduced themselves. Others were curious. Why announce one’s pronouns? Especially when it’s obvious by looking that those announcing their pronouns as “she/her” were clearly women. I’m hoping this explanation helps. 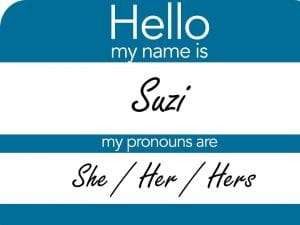 Nearly everyone is assigned a gender at birth. Whoever delivers us declares us to be a boy baby or girl baby based on the shape of our body. For most people that’s the end of the story. They understand themselves to be the gender matching what their body appeared to be during the first moments of their life.

For some, though, it’s not that simple. At some point in their life they begin to understand that their gender may be different from what was assigned at birth. Such people are called transgender (or trans). Other people may have anatomical, hormonal, or chromosomal characteristics of both sexes. Such people are called intersex.

It has become widespread practice to announce one’s pronouns when introducing oneself in areas and institutions seeking to be sensitive to people of transgender or intersex experience. A key suggestion for congregations hoping to be welcoming to transgender and non-binary members is to incorporate pronouns into their traditions. For example:

Congregations benefit in a number of ways from including pronouns as part of their culture. Those whose looks don’t tell the story of their gender will certainly have it easier. But benefits go well beyond that. A space where giving of pronouns is ubiquitous sends a powerful message to those of diverse gender experience that they are welcome in that space. Inversely, any space where giving of pronouns is rare, announces that its leadership has not put forth the effort to educate themselves and membership about the importance of pronouns. In such a space, people of diverse gender experiences will question whether their presence is valued.

Finally, giving pronouns reminds everyone of the existence of diverse gender experiences. Those whose body sex matches their gender assigned at birth have certain privilege. Some of that privilege involves never having to think about issues faced by those who don’t share their privilege. Giving of pronouns raises awareness of the social justice struggles of the transgender and intersex communities. Awareness and education around social justice struggles is major goal of UU faith communities.

Previous
Continuing the theme of Curiosity at home!
Next
Sara Beck Concert 6/15/19 at One World…